It was in Disneyland’s magical kingdom where Karen agreed to marry Chris. The pair was headed to a Bon Jovi concert in Minneapolis when Chris made a surprise detour.

“We arrived to the park first thing in the morning and he popped the question with Cinderella’s castle as the backdrop,” says Karen. “It was romantic and one of the most special days of my life.”

Karen and Chris’s aquamarine floral themed wedding was held on August 20, 2011, in front of 250 guests. Their ceremony was at St. Anthony’s Church in Thunder Bay, Ont., and their reception was held at the Davinci Centre.

Karen’s favourite wedding detail was her cake, which was made by a close friend and had a Minnie and Mickey Mouse cake topper. She and Chris saved the top layer to eat on their first anniversary.

Their wedding song was Let’s Make a Memory by Bon Jovi, because of the concert they attended prior to getting engaged.

front of the wedding dress

back of the wedding dress

Here's something to brighten your day! See the wh

Ok ok. Last one of this modern boho look. You real

With a resurgence of boho, macrame is crazy popula

Don't you love this mix of modern and boho? Plann

That bouquet tho!! Planner @eventsbyelena Venue

We said it before and we will say it again. The fl 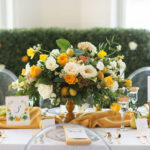 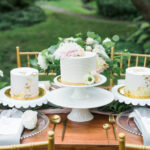 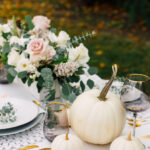 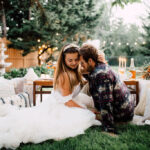