It was an intimate wedding spent with family and close friends when Ashley and Matt were married on Bingin Beach in Bali, Indonesia.

Ashley recalls her proposal story as one of the most romantic and unexpected moments in her life. Ashley and Matt were house-sitting at a refurbished farm house in Italy. They were both in farming clothes and had been working around the property all day. Later on that day, around a fire pit Matt had built and a special dinner he had cooked, they two enjoyed their evening with wine. Matt was kneeling down beside the fire when he turned around and proposed. The ring that Matt proposed with was one that the couple had picked out months earlier in Turkey; one that featured an antique red coral stone.

The couple’s favourite wedding moment was walking down the beach barefoot, holding hands before exchanging vows. “As we were reading our vows, Matt was so nervous that he kissed me before he was supposed to,” says Ashley. Their favourite moments also included watching the fire dancers perform after dinner, which according to the bride was almost as entertaining as was watching everyone’s faces during their show.

With a Bohemian/beach theme for their wedding day, the couple’s favourite details included the bride’s dress, a handmade treasure by the bride’s friend Lindsay Walsh. The newlyweds were also thrilled to have traditional Balinese Rindik music play during their ceremony. “That was a unique and traditional touch,” says Ashley. 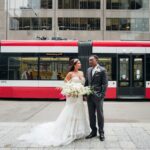 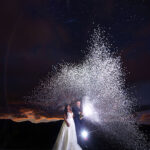 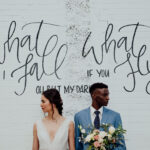 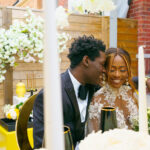 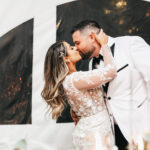